There are only two classes, one for dogs and one for bitches which will be judged separately and awarded first through 4th, with the 1st placement in each being awarded Best Dog and Best Bitch.

A Ribbon and Medallion will be provided for each placement and a Rosette for Best Dog and Best Bitch.

Breed Figure will be awarded to the breeder of Best Dog and Best Bitch in Maturity.

$50.00 Cash will be awarded to the owner of the Best Dog and Best Bitch.

Other trophies and rosettes may be awarded at the discretion of the National Specialty Committee.

The same judge will be used to judge both the Futurity and Maturity.

For payment send to appropriate contacts on form or check out our Store to pay by pay pal or credit card. 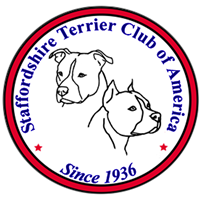 GENERAL
A. Correct and timely nominations of both the litter and the individual puppy are required.
B. Prizes can only be won through competition at the STCA National Futurity held in conjunction with the STCA National Specialty.
C. Nomination forms are on this website
D. The Futurity Director and committee members are eligible to participate in Futurity Competition

C. The fee to nominate the litter is $25.00. There will be no refunds. Late nominations will be accepted up to 30 days after whelping date with an                   additional fee of $50.00.
D. The nomination of a litter makes all puppies in the litter eligible for individual nomination

A. Nomination must be made by the legal owner or co-owner of the puppy as of the date of nomination.

B. Nomination must be made on or before four (4) months of age.

D. An entire litter may be individually nominated by the breeder before puppies are sold by paying the fee for each puppy and supplying whelping date, name, sex, and color for each puppy. If neither litter registration number of individual registration number is available at the time of nomination, this must be supplied as soon as available and in no case later than nine weeks before the Futurity judging.

E. Any changes in the identifying information which will be included in the Catalog must be received by the Futurity Director six (6) weeks prior to Futurity Judging. Failure to provide such information will result in disqualification.